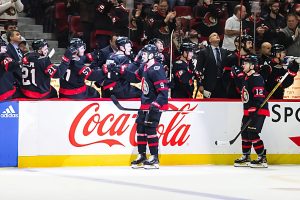 The playoffs have continuously slipped further out of reach, and now it is important to understand the Ottawa Senators current salary cap limitations. Otherwise, trying to decipher which piece they should target becomes impossible. Therefore, what is presented here is an analysis of the Ottawa Senators current salary cap landscape. One thing is for sure, depending on who they bring back from this year’s version, cap space is going to be tight. Currently, for this season, the Senators have approximately $3.28 M in cap space, according to capfriendly.com. Even though this year has been a disappointment for the team, many individuals did impress. For the most part, the team will likely stay intact.

As the roster stands right now, the Senators have 13 players under contract going into the 2023-24 season. This totals $66.3 M in committed salary, which leaves about $17.2 M in available cap freedom. This is with consideration of the cap increase from $82.5 M to $83.5 M. Also, if we recall, this does account for two major increases, with Tim Stutzle and Artem Zub. Stutzle goes from a poultry $925 K to $8.35 M. Whereas Zub jumps from $2.5M to $4.6 M. However, one player included in the $66.3 M, Nikita Zaitsev, will likely be moved to free up space. The problem with that is Ottawa will likely be stuck with a portion of that contract, whether he is moved via buyout or trade. For example, if they go the buyout route, it will cost the Senators $2.83 M against their 2023-24 cap.

How to Spend the Available Cap Space

Embed from Getty Imageswindow.gie=window.gie||function(c){(gie.q=gie.q||[]).push(c)};gie(function(){gie.widgets.load({id:’knUObAxoSBhGzhUTR6SzMQ’,sig:’dnnj3cYQsc1i6WUcPfR5COxp2aCkM6m986z3YELirLY=’,w:’594px’,h:’462px’,items:’1457519820′,caption: true ,tld:’com’,is360: false })});//embed-cdn.gettyimages.com/widgets.js
Now let us examine how to best spend that $17.2 M of remaining cap allotment. It seems the consensus, first and foremost priority begins and ends with Alex DeBrincat. The two-time 41-goal man is high on anyone’s priority list. With a qualifying offer sitting at $9 M, DeBrincat will not come at a bargain. The Senators will be lucky to sneak him under an average annual salary of $8.5 M. So, if we put that amount on the books, $17.2 M – $8.5 M, lands at $8.7 M remaining, for around seven or eight roster spots. As you can tell, this does leave management’s hands tied. If we tack on the top RFAs, which include Shane Pinto, Erik Brannstrom, and Jacob Bernard-Docker, each at about $900 K each.  That means we have $6 M left for four or five unrestricted free agents or prospects.

This would put the prospective roster at:

Leaving holes at the forward position, as well as in net. Some key forwards from this year’s team who will be UFAs, are Austin Watson, Derick Brassard, and Tyler Motte. The prospect list who will be fighting for spots out of camp is as follows: Jake Lucchini, Egor Sokolov, Zach Ostapchuk, and Ridly Greig, among others. If not obvious already, based on available spots and money, it really does become a numbers game.

Value From the Forward Group

One aspect that is undeniable about the Ottawa Senators forward group is their value. No one can make a strong case that they have overpaid any individual (either short or long-term discussion). We would label the youthful core signed long-term such as Tkachuk, Stutzle, Norris, or Batherson. It is the bottom six that need to be filled out. Each of the current three UFAs mentioned has been decent this year. Conversely, they have not been overwhelmingly strong enough to deem themselves a necessary signing. Basically, the decision would seem to be based on where the organization can save some money. Then, they can allow the appropriate prospects to fill the remaining holes. It seems like Austin Watson might have the edge if he will take a reduction from the $1.5 M he is currently earning. He brings toughness, good locker room presence, shot-blocking, and kills penalties, great attributes for the available fourth-line slot.

The next major question mark is between the pipes. At the beginning of the season, along with many aspects of the roster, the Cam Talbot trade (for Filip Gustavsson), was creating a lot of hype. Talbot has been just ‘all right’ this season. Despite missing the first month of the season to injury, he has largely been given the starter’s role. He does have a superior record against playoff teams to his compatriot, Anton Forsberg. Although the toll of the grind of the season has shown its colors, some have questioned the value of the $3.67 M that Talbot is under contract for this season. The UFA to-be will likely see a dip in salary, one thing that makes him appealing to the Senators organization. The Senators do seem committed to Forsberg as a backup after he signed a shiny three-year, $8 M contract last season.

The Senators should bring back Talbot. Given the familiarity factor, and the rotating role with Forsberg, he would be a solid fit. This, of course, is assuming he opts for a salary reduction given his age and performance this year. The other option for the organization is to try and go out and buy another number-one goalie. This is difficult to do and would sacrifice the money available for a top-four defenceman. Moreover, two of their goalie prospects are likely getting close to a hard look with the club. That was why the Talbot trade made so much sense to buy them time to be NHL-ready.

The Future Between the Pipes

The Senators top two goalie prospects are getting close to the NHL level. Leevi Merilainen seems comfortable in Finland. As a result, he may want to stay for another season before committing full-time to North America. Mads Sogaard might be close to the NHL. This is simply due to his proximity playing with the Belleville Senators over the past couple of seasons. Unfortunately, he may have taken a step back in his development progression this year. That is another reason bringing back Talbot at a bargain makes sense.

What Does it Add Up To

With all this considered, the two main goals for the Senators before the start of the 2023-24 season are to lock up DeBrincat and acquire a top-four D man. Included in a trade package would be Zaitsev and Mathieu Joseph based on his, $2.95 M price tag. The big sell from the Senators standpoint would be adding in draft picks or prospects like Ridly Greig or Zach Ostapchuk. If these types of pieces are included in a package, the Senators should have around $4 – 5 M to afford a top-four D man. This gives a strong indication of what type of player and team they can hone in on to deal with.

The post Who the Ottawa Senators Can Target Based on Salary Cap Limitations appeared first on Last Word On Hockey.