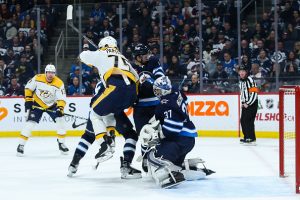 Welcome back to another day of NHL Predictions. Each day, Last Word on Hockey takes a look at the games that are happening and gives our predictions for each one, breaking down head-to-head and other factors that may play in. We also have a featured game of the day, which is considered must-watch TV. Today’s featured game is the Winnipeg Jets vs Nashville Predators.

In the first game on tonight’s NHL predictions, we have a cross-divisional matchup. The Buffalo Sabres tore into the St. Louis Blues two months ago in Buffalo with two power-play goals on three attempts. Buffalo’s power play is ranked fourth in the league as of Monday. The team has scored four or more goals four times this month alone, winning all of those games. The Sabres average 3.8 goals per game throughout the season. St. Louis has allowed four-plus goals five times in the same span and only won once. The Blues most recently allowed five goals in a home loss to the Chicago Blackhawks on Saturday. That loss brought the Blues to 3-3 in their home games in January.

This will be the first meeting between two of the worst teams not only in the West but in the league overall. Both teams rank 26th or lower in all team stats provided in the NHL’s game preview. The Anaheim Ducks come in dead last for both goals-for and goals-against per game. The Ducks have allowed five or more goals to opponents in half of their 10 games in January. In each of those losses, they scored three or fewer goals but have not been shut out since December 12th & 13th when they lost by a combined score of 10-0 in two nights. The Arizona Coyotes suffered two consecutive scoreless losses on the 19th and 21st. The Coyotes’ only wins this month have come when they scored four goals. Clayton Keller scored three of four in the Coyotes’ 4-1 win over the Vegas Golden Knights on Sunday.

These two teams combine for eight shutouts among their goalkeepers, including Alexandar Georgiev‘s first of the season over the Washington Capitals in November. Not surprisingly, both Washington and the Colorado Avalanche are top 10 in goals allowed per game. The Avalanche have allowed only one goal in each of their last three games as part of a five-game win streak. That streak began with a 7-0 win over the Ottawa Senators. Alex Newhook, Artturi Lehkonen, and Mikko Rantanen all scored twice that night. Lehkonen and Rantanen repeated the feat in Calgary for five goals each in five games. The Capitals’ offence has trended in the opposite direction, especially with captain Alex Ovechkin day-to-day with a lower-body injury. Dylan Strome‘s three goals and Evgeny Kuznetsov‘s four assists in five games lead Washington’s recent scorers. Nicklas Backstrom has had a point in every other game since returning from injury earlier in the month; if he continues the pattern he may log another assist.

This will be the first game for Rick Tocchet after he was officially hired on Sunday. It will also be the first meeting of the two tanking teams for the season. Tocchet’s hiring arguably brought the most excitement for the Vancouver Canucks in weeks. They have given up four-plus goals in eight different games in January, including each of their last three games. The Chicago Blackhawks have had a bit more luck this month. The Blackhawks have a 6-4-0 record in their last 10 games, including a three-game win streak before their most recent outing, a 2-1 loss to the Los Angeles Kings. They also lost forward Tyler Johnson to an ankle injury that game. Defenceman Seth Jones scored a point in four consecutive games before the setback to the Kings.

The featured game of tonight’s NHL predictions is a Central Divison square-off. These two teams played a tight game in the middle of December to start their season series. Both teams scored in the first 20 minutes but couldn’t generate more offence until Kyle Connor broke through in overtime. Connor has three goals in the previous five games and points in 10 of 11 contests in January. His 24 goals are second to Mark Scheifele who has 29 and has six points in five games coming into Nashville. Both Scheifele and Connor had goals in the Jets’ 5-3 win over the Philadelphia Flyers on Sunday. The second-best team in the Central Division nearly let the game slip away, though. The Jets’ usually-strong penalty kill – over 80 percent effective – allowed two power-play goals from the Flyers which helped Philadelphia tie the game in the final period. Bottom-six skaters Karson Kuhlman and Kevin Stenlund struck in the third period to lift the Jets to victory.

The Nashville Predators have been off since Saturday night when they beat the Kings 5-3. Six players had multi-point nights in the win, led by Roman Josi with three assists. Josi is tied for the team lead in points – 39 – with Filip Forsberg, who only has one point in the last five games. He did score goals in three straight games earlier in the month, however. Matt Duchene sits three behind Josi and Forsberg in total points after scoring twice against the Kings. The Predators have three more skaters above 20 points, and rookie Juuso Parssinen is close to reaching the mark as well.