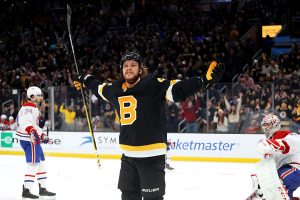 Welcome back to another day of NHL Predictions. Each day, Last Word on Hockey takes a look at the games that are happening and gives our predictions for each one, breaking down head-to-head and other factors that may play in. We also have a featured game of the day, which is considered must-watch TV. Today’s featured game is between the Boston Bruins and the Montreal Canadiens.

The first game on the NHL Predictions slate is a crucial matchup. Both the Florida Panthers and the Pittsburgh Penguins are fighting for playoff spots. Pittsburgh occupies the second wild card spot, but Florida is right on their heels.

One factor that does not bode well for Florida is both of their goalies (Sergei Bobrovsky and Spencer Knight) are out. Tristan Jarry did return for the Penguins and has been brilliant since returning. Despite Florida boasting a lethal attack up front, it does not overcome the injuries between the pipes. With Sidney Crosby, Evgeni Malkin, and Jake Guentzel playing good hockey the tide is tilted in their favour.

The next game on our NHL Predictions is an interesting one. A Western Conference team, the Los Angeles Kings, travels to take on the Philadelphia Flyers. These two have met before and the Flyers prevailed 4-2.

It is easy to be down on the Flyers, but they have been good in the month of January. They’ve gone 7-4 throughout the month, beating some premiere talent. Los Angeles looks to get back to their winning ways as they’ve done 2-3 in their last five games.

A good goalie matchup between Carter Hart and Phoenix Copley could be on tap as both have exceeded expectations set for them.

The next game on our NHL Predictions is the second of two meetings. A competitive Minnesota Wild club travels to take on the Tampa Bay Lightning. Minnesota took the first game in a 5-1 beatdown.

The talent in this game is excellent. Steven Stamkos, Nikita Kucherov, and Kirill Kaprizov are the players to watch for. Stamkos recently scored his 500th career goal and what a milestone for him.

One key factor is special teams. Tampa Bay has the second-best power-play unit and Minnesota is middle of the pack in killing penalties. Pair that with good goaltending and Tampa comes away with the two points.

This is the second of two meetings between these two teams. The San Jose Sharks take on the Detroit Red Wings. Detroit won the first matchup in a 7-4 high-scoring battle.

Detroit is not entirely out of the playoff picture, but San Jose is. However, each team has the rumour mill swirling around them in regard to the premiere talent on their roster. Timo Meier is a prime candidate to be moved and the entire world is appreciating the Norris calibre season Erik Karlsson is having.

Detroit captain Dylan Larkin is on pace for another career year and is a large reason for their success. After a beat down by the Bruins, San Jose gets back in the win column.

This NHL Predictions game features two of the best teams in their respective conferences. The Vegas Golden Knights continue their road trip against the New Jersey Devils. Vegas is a very good road team (15-4-2), whereas New Jersey has a 12-10-2 record on home ice.

Both teams have key players injured with Mark Stone and Shea Theodore for Vegas and John Marino for New Jersey. But there are still impact players in each lineup. One player to watch for is Jack Hughes. He has 10 goals in the month of January and 9 points in his last five games. Calder Trophy nominee Logan Thompson will need to shine in order to get the win.

Tonight’s featured matchup on the NHL Predictions is one of the oldest rivalries in hockey. The Boston Bruins travel north to take on the Montreal Canadiens. It is always exciting when these two teams meet, regardless of where they are in the standings.

The injury bug has plagued both teams. First-overall pick Juraf Slafkovsky (3 months), and Cole Caufield (done for the season) are the key injuries for Montreal. Boston has Tomas Nosek out for the next four weeks, and Jake DeBrusk remains out, but it skating today.

It is not a secret that the Boston Bruins are the superior team. They are deep and have one of the best goalie tandems in the league. In addition, they have some of the best special teams units in the league (3rd best PP, 1st best PK). One problem that could plague Montreal is they’ve allowed the fifth most goals (171), and Boston has scored 175 goals this season. Montreal did take down the Toronto Maple Leafs the other night, but this could be a taller task.