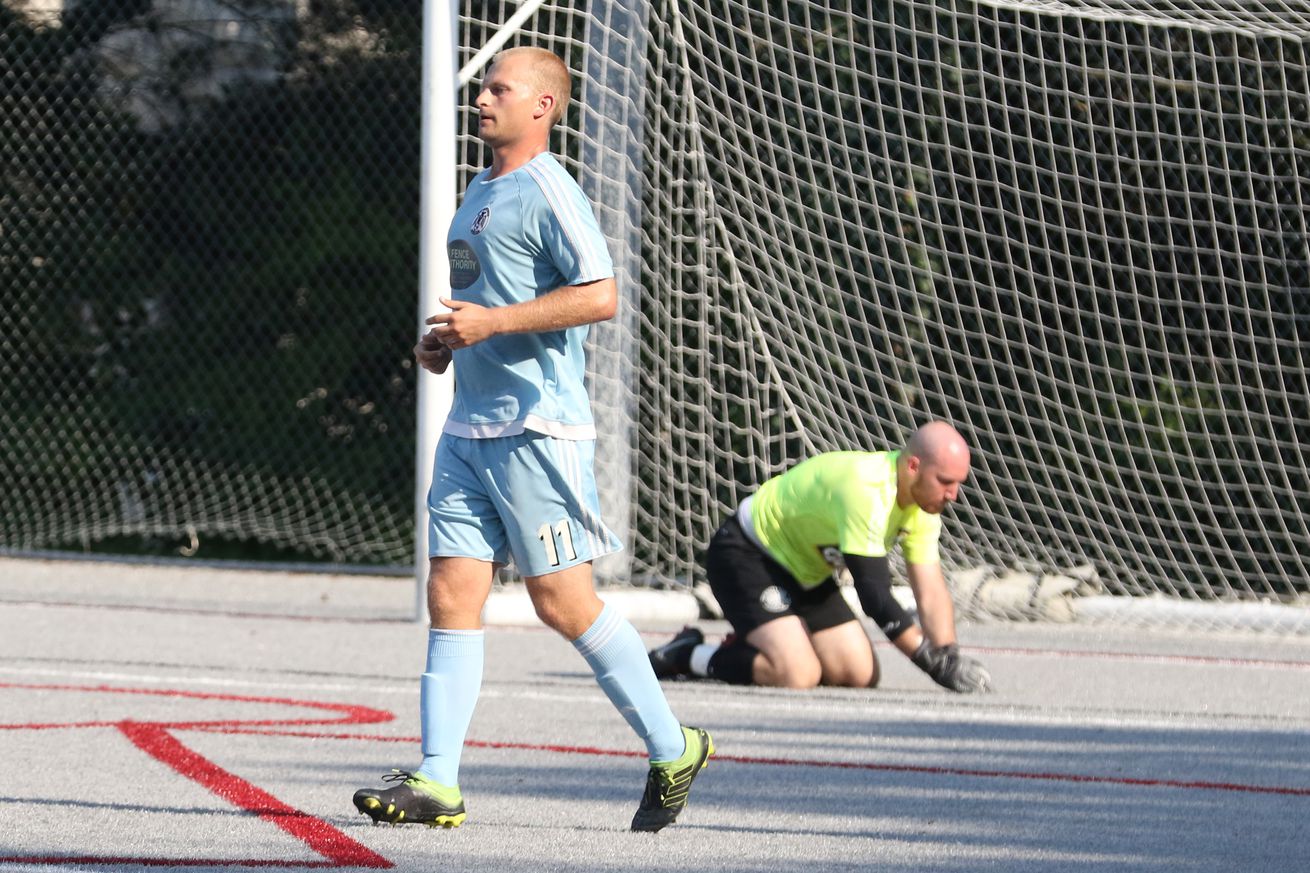 Chas Wilson after completing a hat trick for West Chester United in a 5-0 win over Danubia SC on September 22, 2019 | Photo by Matt Ralph

Three teams from the area remain in the hunt for a Lamar Hunt U.S. Open Cup berth for 2020 after the first round of local qualifying over the weekend.

West Chester United topped Danubia SC in their first qualifier in a decade and Vereiningung Erzgebirge got the better of Ukrainian Nationals in games played on Sunday while their fellow United Soccer League of Pennsylvania rivals United German Hungarians received a bye to the second round.

West Chester United scored in the fourth minute when AJ Bishop headed in a cross from Sam Bollinger and ended up with a 5-0 win courtesy of a hat trick from forward Chas Wilson, who added an assist on Bollinger’s goal late in the second half.

“Another year, obviously we went really far last year so there’s a newfound motivation to get back and maybe even go a little bit further,” Wilson said after the match. “I think it’s really cool too, guys on the other side, this is the first time they’ve been in it in 10 years.”

Playing on their home field — the gray turf at Rosemont College — Danubia had trouble creating chances but were able to keep the game despite conceding most of the possession thanks to goalkeeper Daniel Saint-Pol, who came up with 12 stops on the day, including a couple from point blank range on Wilson and Troy Amspacher, who assisted on Wilson’s first of the day. Bishop had a shot from close range clang off the bar and Saint-Pol did well to tip a rocketed shot from distance by Andreas Bartosinski over the bar.

“He’s a phenomenal keeper in my eyes and I thought he did a really great job today,” said head coach Brian Coulter, who ended up subbing in at the end of the game. “Did we produce in front of him? No, I think we could have produced better.”

Despite the result, Coulter said he was pleased with the opportunity to return to the competition and to also play in it for the first time.

“Playing for the Lamar Hunt Open Cup and being part of this historic tournament gives you a sense of pride,” Coulter said.

Greg Shertzer put VE up 2-0 in the first half and Derek Antonini and Devlin Mette each added goals in the second half of their 4-1 win on Sunday at the Ukrainian Nationals home field in North Wales.