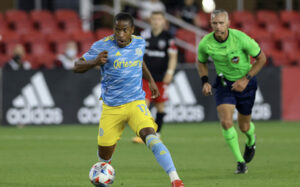 It was an ill-tempered affair at a rainy Red Bull Arena. After a first half that saw slow build-up after frenetic starts, the second half saw all the rage. Patryk Klimala scored a penalty after Matt Freese held Wikelman Carmona in the box. He saw red and will miss the next match, but Philadelphia came back despite having 10 men. Sergio Santos powered a header in off the post past Carlos Coronel to leave Harrison with a point. There were many encounters of pushing and other scuffles along the way.

New York makes one change to the side that on at Orlando City: Amro Tarek starts over Sean Nealis who’s dealing with a knock. The rest of the team is unchanged, captain Sean Davis makes his 150th club appearance. Jim Curtain shuffles the deck to the team that lost at Nashville. Andre Blake is out to Gold Cup duty, so homegrown talent Matthew Freese gets his first start in goal. Jose Martinez returns to the lineup; Kacper Przybylko and Daniel Gazdag lead the line with Cory Burke also away to Gold Cup with Jamaica.

First Half: A big chance missed at both ends and a cagey opening half

With two teams playing similar styles, the game was always going to start out fast. That’s exactly how it came out in the opening 20 minutes.

There were chances at both ends, and both keepers were equal to it. Coronel made a big stop on Gazdag in the eighth minute. Freese also made a nice save on Klimala.

The game eventually slowed down from its frenetic start. Mbaizo earned the game’s first yellow card for a foul on Tolkin. Yearwood also got a yellow later in the half for a tackle on Monteiro. Shoving between players ensued afterwards.

A Union corner before the end of the half saw Sean Davis make a key block to end an energetic first half. At times decent, at times sloppy play from both teams. New York had one shot on target, the Klimala miss as they struggled to create clear opportunities in attack. Philadelphia showed a few bright sequences on the counter but ultimately petered out.

No changes to start the second half.

Coronel made another wonderful save, at full stretch to deny Monteiro. He parried his effort from going into the corner. Red Bulls made their first sub of the night with Frankie Amaya replacing Yearwood who was on a yellow card.

Philadelphia earned a free kick about 25 yards from goal. Glesnes effort was denied by the wall. Moments later Red Bulls won a penalty kick after Freese held Carmona in the box. Freese got a straight red card and will miss the next match. Joe Bendik came on to play between the sticks.

Patryk Klimala stepped up to take the penalty and scored. He sent the keeper the wrong way, and calmly got his second goal of the year.

Omir Fernandez and Mandela Egbo came on in place of Carmona and Tarek respectively for New York. Fernandez came close to doubling the lead with a beautiful side foot effort that hit side netting.

Philadelphia equalized with five minutes to go. The cross by Monteiro found the head of Sergio Santos who headed it in off the post past Coronel. Jason Pendent and Tom Barlow subbed in for Tolkin and goalscorer Klimala. After 98 minutes, the points were shared in a fiesta affair.

58′ RED Card! Matthew Freese is given a red card for this play. Joe Bendik, the third-string keeper, is coming in. #RBNYvPHI | 0-0 | #MLS pic.twitter.com/zF2gZXGB37

This was a missed opportunity for the Red Bulls, no question about it. A chance to go third in the Eastern conference against a team that went down to ten men, and to come out with a draw is disappointing. Furthermore, the draw puts a damper on spirits as they now have to assess the fitness of both Tolkin and Tarek who left with knocks. The backline has been decimated, right-backs and Davis playing as an emergency center-back.

It’s nice to see Patryk Klimala on the scoresheet, as he took his penalty well. He gets into good positions but often wait a second too long to get his shot off. This game is just another case of a young team finding their way through a tough schedule. Overall the Red Bulls have done well but will no doubt be kicking themselves after this one. Their next game is against Inter Miami next weekend.

Philadelphia will of course be the happier of the two teams after clawing back with a fine headed goal by Santos. It seemed as if Curtain’s men faced a rough go of it after the Freese red card. But they did just enough to bounce back after their loss at Nashville. They maintain their grip on third place, this Eastern conference is a shark tank as other teams constantly climb over each other. But good teams find ways and this team is good and kept fighting, they come back home next week to play D.C. United.