If the Phillies want to be legitimate playoff contenders in 2021, there are many things they must do. Some obvious ones include Bryce Harper playing like an MVP-caliber player, Aaron Nola, Zack Wheeler, and Zach Eflin building off strong 2020 campaigns, Andrew McCutchen remaining a solid leadoff hitter, Scott Kingery having a bounce-back campaign after a rough 2020 season, and the bullpen being – at least – average.

Here, instead of highlighting things that players must do when the season begins, we are going to hit three things that the Phillies’ front office must accomplish before the beginning of the season to put the team in the best position to succeed.

If this one seems obvious, it’s because it is. J.T. Realmuto is, without question, the Best Catcher in Baseball, as he provides both elite offense and defense. The drop-off between him and any other option (Andrew Knapp?) would be extreme. Plus, Harper and virtually every Phillie of note has been lobbying hard for Realmuto’s return.

The recent reports that the front office, led by Dave Dombrowski, has offered Realmuto a 5-year deal worth around $100 million is a very good sign. However, as that very linked article states, teams such as the Atlanta Braves are still in the picture for making a move on the All-Star catcher.

If the Phillies truly want to make the playoffs in 2021, the bottom line is plain and simple: J.T. Realmuto must be their starting catcher on Opening Day. Any other outcome will be a catastrophic turn of events.

2. Pay for a Bullpen

It is well-documented that the Phillies had the second-worst bullpen of all-time last season. Former GM Matt Klentak’s strategy of taking lottery ticket chance after lottery ticket chance the past few years hit an all-time low during the 2020 season, when midseason additions Brandon Workman, Heath Hembree, David Hale, and David Phelps managed to make the already-horrific bullpen even worse. With even a below-average bullpen instead of a historically bad one, the 2020 Phillies would have been in the playoffs. Instead, they missed the dance by one game.

After hiring someone with the pedigree of Dombrowski, managing partner John Middleton seems to be putting all his chips on the table. He needs to put his money where his mouth is and allow Dombrowksi to spend money in order to acquire a decent bullpen. The inking of Archie Bradley to a 1-year/$6 million contract is a good start.

With players such as Tyler Clippard, Shane Greene, Brad Hand, and old friend Ken Giles still on the market, the Phillies must make a few more moves.

3. Figure Out Centerfield and Shortstop 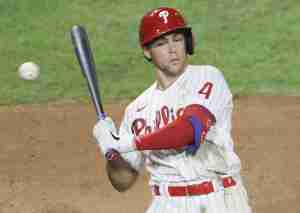 Kingery is likely to be penciled in to either CF or SS/2B (depending on where Jean Segura plays), but given his play last season, he can not be counted upon to be a solid contributor at either position. Adam Haseley should continue to get chances in CF, but manager Joe Girardi has not seemed to have any faith in Haseley to hit left-handed pitching, so he is likely strictly a platoon option. Speedster Roman Quinn is also always an option in CF, but his penchant for getting injured, making head-scratching plays on defense, and striking out does not make him a highly valuable option.

With all that in mind, it is obvious that the Phillies need to add at least at one impact player at either position.

Last year’s starting shortstop, Didi Gregorius, is still available on the open market. He was perhaps the Phillies most consistent hitter in 2020 and is beloved by all teammates everywhere he plays. Other potential starting shortstops still on the market are Marcus Semien, Andrelton Simmons, and old friend Freddy Galvis. Semien is likely out of the Phillies’ price range, Simmons is still an elite defender but is getting older (31) and less reliable, and a Galvis reunion would be fun, but he has many flaws in his game.

After George Springer’s reported signing with the Toronto Blue Jays, none of the CFs left inspire much confidence. Jackie Bradley Jr. is extremely fun to watch in the outfield, but he is a well below-average hitter. Kevin Pillar is in the same boat. No one besides those two are really even worth considering as a potential starting caliber player. Maybe someone like Brian Goodwin or Jake Marisnick could be brought in as a lottery ticket. They could also look to bring in Joc Pederson and see what he could give them in CF, but that is a risky defensive proposition.

The Phillies would be wise to look hard at bringing back Didi or inking Simmons or Galvis and allowing Kingery to return to being a super-utility player until/unless he proves that he can make a difference in the lineup.

There is always a trade market after the season begins but, given the Phillies’ farm system, they probably wouldn’t want to give up high prospects for a player. They are better off making free agent signing which, yes, will cost money.

If the Phillies re-sign Realmuto, pay for a bullpen, and pony up to a deal for a CF/SS, they should be a playoff team in 2021. If not, fans could be in for a long year.