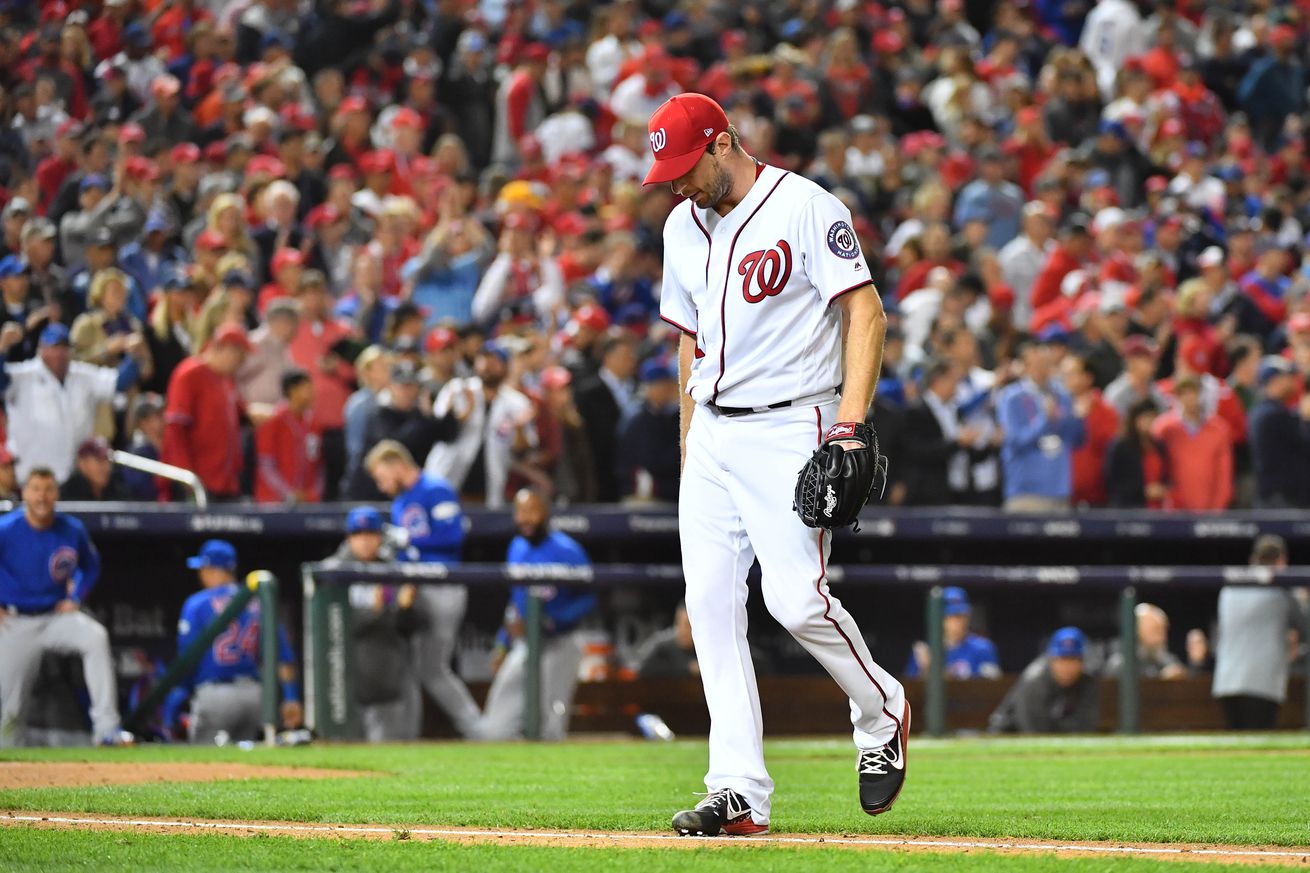 The Phillies are not going to make the playoffs. I think everyone accepts that by now. At some point this week – possibly on Monday night – the team’s tragic number is going to hit zero, and we’ll be left wondering what went wrong.

On the other hand, the Phillies next opponents, the Washington Nationals, are almost certainly going to make the playoffs. While making the playoffs is almost always better than not making them, there are plenty of reasons why the Nats shouldn’t be super excited about their situation either.

The last time they met

In mid July, the Nationals made their final visit to Philadelphia of 2019 and had a chance to sweep. But much like they failed to win the division this season, they failed to finish it out. Maikel Franco hit a walk-off home run in the ninth to win it for the Phillies.

After years of serving as the punching bag of the National League, the Nationals emerged as a contender in 2012. With young stars like Bryce Harper and Stephen Strasburg on hand, the Nationals seemed poised to dominate the division for years to come. Sure enough, they took the East in four of the next six seasons.

If the playoffs are a crapshoot as some baseball experts believe, then it stands to reason that given all those opportunities, the Nats would have won at least one playoff series over the past few years. You’d assume that if nothing else, a team with as much talent as the Nats would have won three out of five games just due to pure luck at some point.

The Nats are 0-4 in the NLDS, with several of the losses coming in horrific fashion. And after every early exit, a scapegoat is quickly assigned. Drew Storen, Bryce Harper, and Dusty Baker are all ex-Nationals in part because of their perceived failings in the playoffs. It’s worth wondering who will take the heat if (when?) the Nats fall short again this year.

Remember when the Nationals fired Dusty Baker for *only* winning the division?

The wild card game is an advantage for the Nationals, right? Right??

For the first time in team history, the Nats appear poised to win a wild card spot. That will give them the privilege to play a play-in game against the other wild card winner. In theory, the Nats should be in great shape for this game because depending on how the week shakes out, they could use one of Max Scherzer, Stephen Strasburg, or Patrick Corbin to start that game. Then you remember that the Nats also had strong rotations for their previous playoff appearances, and they still couldn’t make it past the first round.

Having a strong rotation is important if you want to make the playoffs. If you throw guys like Scherzer, Strasburg, and Corbin out there on a regular basis, you’re going to win a decent amount of games. However, a strong rotation doesn’t necessarily equal success in the playoffs, because just about every playoff team has a few good pitchers at the front of their rotation.

For example, if Strasburg is facing Nick Pivetta, most people would expect the Nationals to win the game. But most playoff rotations don’t include guys like Pivetta (one day maybe). Instead, you might get a matchup like Strasburg vs. Hyun-Jin Ryu, and there’s no clear advantage there. Pitchers also have to face better lineups than they oppose in most of their starts, so that’s also going to generally limit their effectiveness.

Because the impact of starting pitchers is negated, that puts more pressure on a team’s bullpen. Would you like to guess where Nationals’ relievers rank in the National League in team ERA? That’s right, they’re dead last! To their credit, they’ve picked things up a bit in the second half. In the first half, their relievers had an ERA of 6.08. In the second half, it’s down to 5.64, good for 14th in the league.

Never has a team’s baseball postseason fate been more obvious than the 2019 Washington Nationals: one game and out. Hard to go anywhere in October when your bullpen is a Superfund site.

The bullpen could receive a boost if they use starters in certain relief situations. Like they did with Max Scherzer in 2017.

Nationals fans have spent most of the season insisting that their team doesn’t need Bryce Harper and are just fine without him. They’ll point out the spectacular season that Juan Soto is having and mention that the Phillies are only in fourth place with Harper, so how valuable can he really be?

A few problems with this:

Nationals fans will counter by pointing out Harper’s high salary. They’ll claim that if the team re-signed Harper, they wouldn’t have been able to afford Corbin, and that money can also be used to re-sign pending free agent Anthony Rendon.

Right, but if you have Harper there is no Corbin and definitely no Rendon after this year. I’ll take Corbin and Rendon and no Harper. The Nats aren’t the Yankees.

The flaw in this logic is assuming the Nationals couldn’t afford to sign all of those guys. Even if the team has been screwed out of TV money, let’s not pretend that the team owners aren’t insanely rich and spending the money on Harper (which could have been less than the Phillies paid had they just made him a non-insulting offer) would have been a drop in the bucket.

I’m constantly amazed by how eager some fans are to save the team owners money. Let me know the next time a team doesn’t re-sign a player and ticket prices go down accordingly.

It kinda feels like if the Nationals were planning on re-signing their star third baseman, they might have done it already. Once he reaches free agency, his price tag is going to go up, and if the Nationals are going to pull their deferred money BS, he’s probably going to be on a different team next season.

If that wasn’t bad enough for the Nats, they could also be without Stephen Strasburg next season.

There is reportedly “increasing speculation” among MLB sources that Nationals SP Stephen Strasburg is “likely” to opt-out this off-season and leave the team; Strasburg signed a 7-year/$175M extension before the 2016 season with an opt-out after the 2019 season pic.twitter.com/E30xPIHTqs

First off, what kind of a player puts an opt-out in his contract? If he was a real star, he’d insist on not having one to prove that he was loyal to his new team.

Publicly, the Nats have shown confidence that Strasburg will be back with the team next year. But coming off his healthiest season in years, why wouldn’t the 30-year-old want to take what will probably be his last chance for a massive payday? Especially considering there’s another team in the division which is desperate for starting pitching, and has shown a willingness to offer big money to former Nationals.

It will be quite amusing next season when Nats fans start explaining how neither Rendon nor Strasburg were actually that good, and how the team will be just fine without them.

You want me to discuss this series? Sure, why not?

Due to heavy rain during the Phillies previous visit to Washington, we’re going to get five games over the next four days. The Nats will pit their three aces (and the cromulent Anibal Sanchez) against the Phillies’ star-studded rotation of Zach Eflin, Aaron Nola, Drew Smyly, and Jason Vargas.

Even I can’t pretend that the Phillies have the advantage in any of these pitching matchups. Last season, the duels between Nola and Scherzer were thrilling, but 2018 Nola hasn’t been seen around these parts in a while. Of course, because baseball makes no sense, the team will likely break its six-game losing streak in Nola starts when they have to face Scherzer.

They have yet to announce a starting pitcher for the Tuesday afternoon game. The Phillies will probably just go with a bullpen game for that one. Those are normally painful to watch, but since I can’t imagine more than a handful of Phillies fans will even tune in to watch that game, I’m not sure it matters.

Since I like to provide at least a little optimism, here’s a look at some players on the Nationals who have sucked over the past two weeks:

Rendon and Soto slumping at the same time is a nightmare. Rendon’s AVG has dropped 13 points in 2 weeks and Soto is 1/17 on the trip. I know they’ll get back on track soon but man… not the right time to slump.

The Phillies will lose the first two. And once they’re nice and eliminated, they’ll win the next three to begin their first five-game winning streak of the season. Those three losses will lead to the Nats dropping to the second wild card spot.