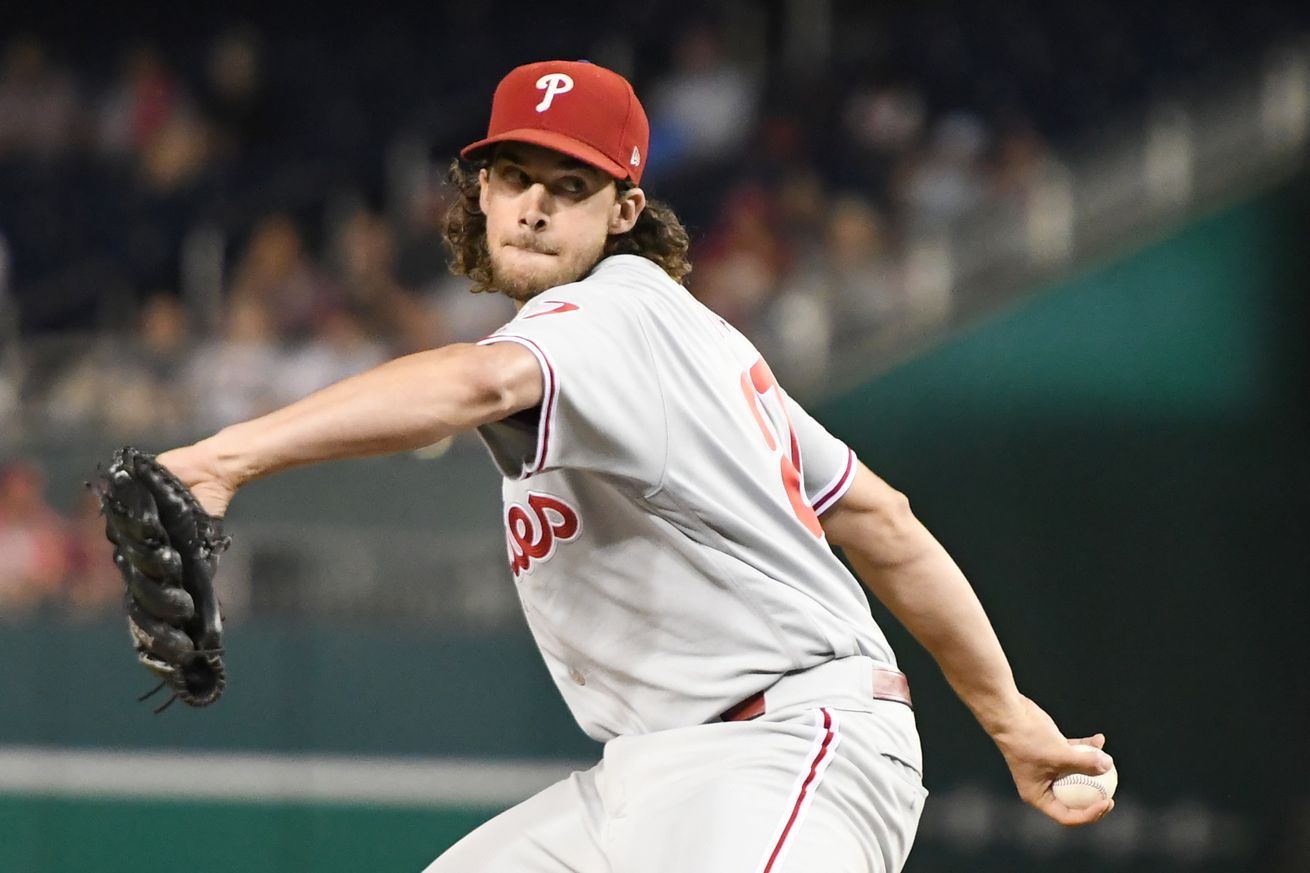 Pushed by his manager and squeezed by the umpire, Aaron Nola came out on the losing end once again | Photo by Mitchell Layton/Getty Images

It didn’t mean much, but it was still frustrating

After being officially eliminated from playoff contention on Tuesday afternoon, the Phillies couldn’t have been fired up about having another game scheduled for the evening. Especially since they’d have to face Nationals ace Max Scherzer.

As it turned out, they actually did pretty well against Scherzer. However, thanks to some curious moves by Gabe Kapler combined with an even more curious strike zone, the Phillies fell to the Nationals for the second time in a day, this time by a score of 6-5.

Most of the damage against Scherzer was courtesy of Brad Miller. He got things started with a three-run home run in the first inning, and added a solo shot in the fourth.

His last one was … three days ago. pic.twitter.com/vlf2KcdUJQ

Thanks to those four runs, the Phillies seemed on track to finally win a game started by Aaron Nola. The only offense for the Nationals through five innings came via a solo home run and a sacrifice fly by Yan Gomes.

In the sixth inning, Nola appeared to tire. He allowed two base runners and was approaching a season high in pitches thrown. Approaching the end of the season, you might think the prudent move would be to not push the heavily-leaned-upon staff ace in a meaningless game. But unlike Opening Day 2018, Kapler decided to leave Nola in the game.

The ill-timed faith in Nola might have worked out if not for home plate umpire Stu Scheurwater. On two different pitches, Nola appeared to have delivered strike three to Howie Kendrick, but Scheurwater disagreed. Instead of an inning ending strike out, Kendrick walked to load the bases, and Kapler finally called for a reliever. It only took Jared Hughes two pitches to give up the lead.

Bryce Harper got the Phillies a little closer by taking his nemesis Hunter Strickland deep. But aside from whatever personal satisfaction Harper gained, all it really accomplished was give the home crowd a chance to heckle him further.

It was just another loss in a season that has seen far more of them than anyone expected. You might think that after they were officially eliminated earlier in the day, a loss like this wouldn’t seem nearly as annoying. But baseball has a way of surprising you sometimes.