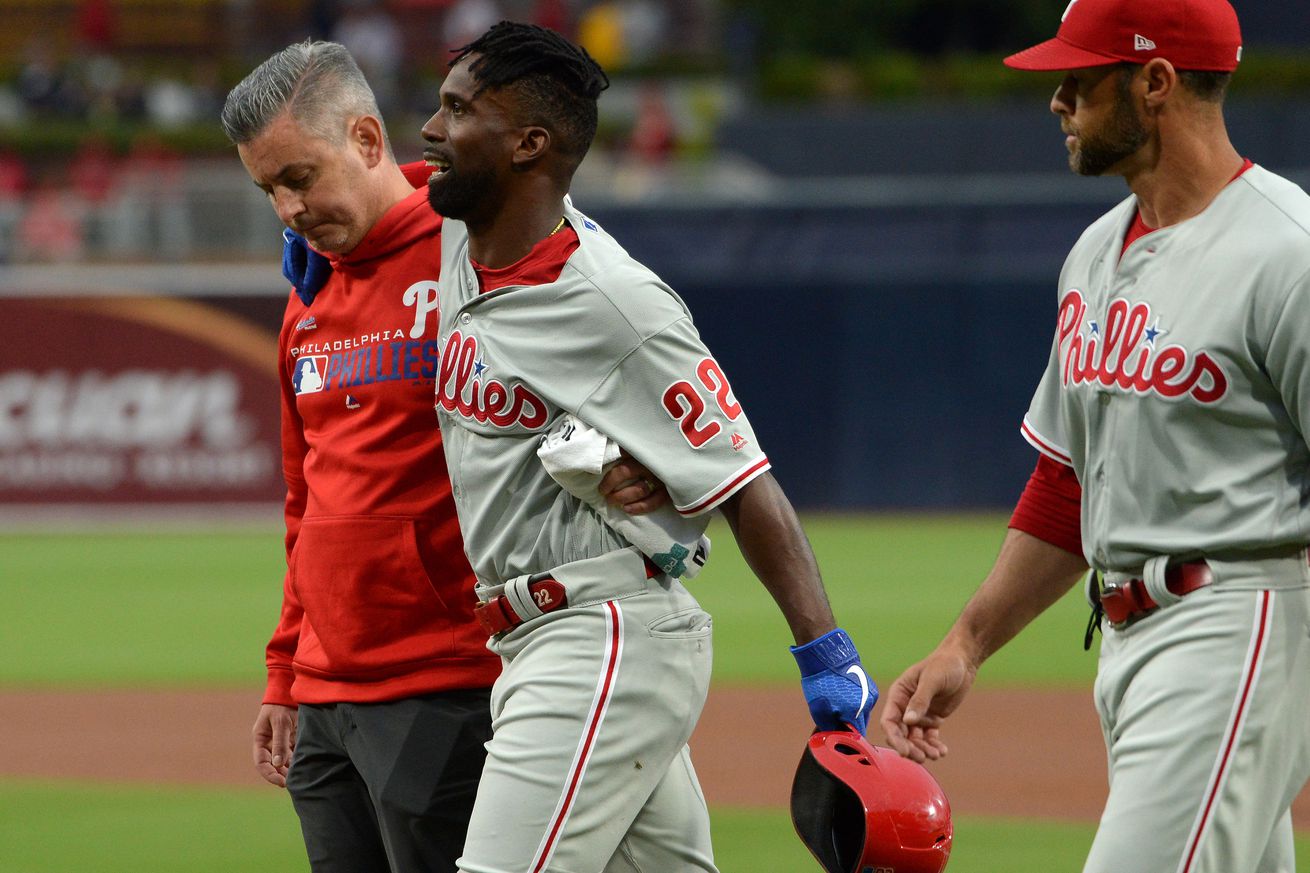 Yes, the Phillies have suffered injuries, but they’re far from alone.

There are things in baseball that are out of a player’s and team’s control.

When a batter hits a ball hard, they often times have no control over where that ball is going to land. In that regard, the Phillies were on the wrong side of luck during yesterday’s 5-4 loss to the Braves in Atlanta.

Adam Haseley had a chance to put the Phillies ahead in the top of the 8th inning, trailing by a run with runners on 1st and 3rd with two out, only his 100+ mph line drive landed right in the glove of first baseman Freddie Freeman and ended the rally.

Such is sports. Our grand game is an often-times infuriating mixture of skill, determination and yes, just dumb luck (or lack of it).

One of the other things that is out of a player’s or team’s control are injuries, and in that regard, the Phillies have been particularly unlucky in that area, too.

Only four teams in baseball have lost more WAR to players who were injured than the Phillies’ 5.47 this year. In fact, the list of injured Phils is so long, the team’s MLB.com depth chart couldn’t fit them all on the page.

Losing Andrew McCutchen was a killer, as he was on pace for a 4-to-4.5 win season, according to Fangraphs. The team lost seven of their top eight bullpen arms for most of the season. David Robertson, Pat Neshek, Tommy Hunter, Seranthony Dominguez and Adam Morgan were their top five arms coming into 2019, and important depth pieces like Victor Arano and Edubray Ramos also missed virtually all of this year. Bone spurs forced Jake Arrieta’s season to end in early August (after a month of ineffective pitching because of those bone spurs), and Jay Bruce and Corey Dickerson, McCutchen’s replacement in left field, missed time with various injuries as well. Dickerson’s broken foot has forced him to miss the last three weeks of the season.

This is all clearly not good, and presented a challenge for the Phillies this season, but how much can the Phils’ front office use it as an excuse for missing the playoffs? Consider that the four teams who have lost more WAR due to injuries, the Rays (15.54!!!), Astros (8.52), Dodgers (8.01) and Twins (5.89) have all won 90+ games, and that doesn’t even count the Yankees…

…whose players have lost more games to injury than any other team in baseball and just won 100 games behind second-year manager Aaron Boone.

Why were those five teams able to thrive despite their ailments while the Phillies did not?

The Phillies will argue that the concentration of injuries at one position, such as the bullpen, was a big factor and, of course, they are right. It’s difficult to win games in a postseason race when Mike Morin, Blake Parker, Jared Hughes and Nick Vincent are logging high leverage innings. But it’s also fair to note that the bullpen’s ERA of 4.47 is 9th in the NL, better than the Mets’ 5.13 and Nationals’ 5.86, and only slightly worse than Atlanta’s 4.29. In fact, the average bullpen ERA in the National League this year is 4.54, so you can say that, despite the relief corps getting decimated by injury, the group they’ve had has actually been slightly better than league average.

Still, there’s no doubt a few of their late-game losses probably wouldn’t have happened if Robertson, Neshek or Dominguez were available and not the motley crew mentioned above.

The loss of McCutchen atop the lineup certainly hurt. Through June 3, his last game with the team this season, Phillies leadoff hitters had a combined on-base percentage (OBP) of .379, second-best in the Majors. After McCutchen’s injury, Phils’ leadoff hitters have put up the third-worst OBP in the league, .302. However, Dickerson’s 34 RBIs in 34 games helped beef up the middle of the lineup, and Bruce’s hot start after his arrival (seven HRs and 13 RBIs in his first 12 games) really paced the lineup, too.

The Phillies, meanwhile, have Bryce Harper with 32 and two others, Rhys Hoskins (29), and J.T. Realmuto (25), with more than 20. That’s not nearly enough from a lineup that has, other than McCutchen, remained healthy this year.

Phillies hitters simply did not take part in the homer barrage that swept through the game in 2019. In addition, their bench players were far below league-average, which speaks to the team’s lack of position player depth. Phils pinch-hitters posted an OPS of .635 this year, 21st in MLB. The Twins’ .871 was 4th, the Yankees’ .797 was 5th, and the Dodgers’ .763 was 7th.

As for the rotation, the Phillies are tied for 12th in fWAR this year, with only the Rockies and Giants having worse marks. Phils starters gave up the 3rd-most home runs per nine innings (1.58), their 4.86 FIP was also 3rd-worst, their 4.55 ERA was 6th-worst, and it wasn’t just because of Arrieta’s bone spurs. Aaron Nola struggled in April and is struggling again in September, while Nick Pivetta, Zach Eflin and Vince Velasquez have all been inconsistent and/or disappointing.

Houston lost Carlos Correa, George Springer, Jose Altuve and others for long stretches of time, but made up for it with a killer rotation of Justin Verlander, Gerrit Cole, Wade Miley and Zach Greinke. The Rays certainly didn’t have an offense that blew anyone’s doors off, but they and the Astros were tied for the best ERA in the rotation, at 3.63. Tampa lost Tyler Glasnow after eight starts due to an injury and he’s just making his way back now, and Yonny Chirinos was effective until he got hurt in August, but they still had Blake Snell, Charlie Morton and Ryne Stanek step up and provide consistency in his place.

The Phillies got no such help from their supposed depth. Cole Irvin had a 5.60 ERA in three starts, Jerad Eickhoff was at 5.40 in 10 starts and Enyel de los Santos just got one crack at starting a baseball game this year and gave up four earned runs in four innings of work. Drew Anderson and JoJo Romero weren’t good enough to even get a sniff. Jason Vargas and Drew Smyly were added for nothing and, despite what you might have heard certain front office people saying, they provided very little.

So yes, injuries played a part in the team’s inability to make the postseason. The numbers say so. But stronger depth and better production from established stars allowed the teams in front of the Phillies to thrive despite their injuries, while the Phils simply tried to survive them.

On the latest edition of Continued Success, hosts Justin Klugh and Liz Roscher discussed Matt Klentak’s comments to reporters in Atlanta this week, and whether or not the rationale he used to explain the team’s struggles in 2019 rang true.