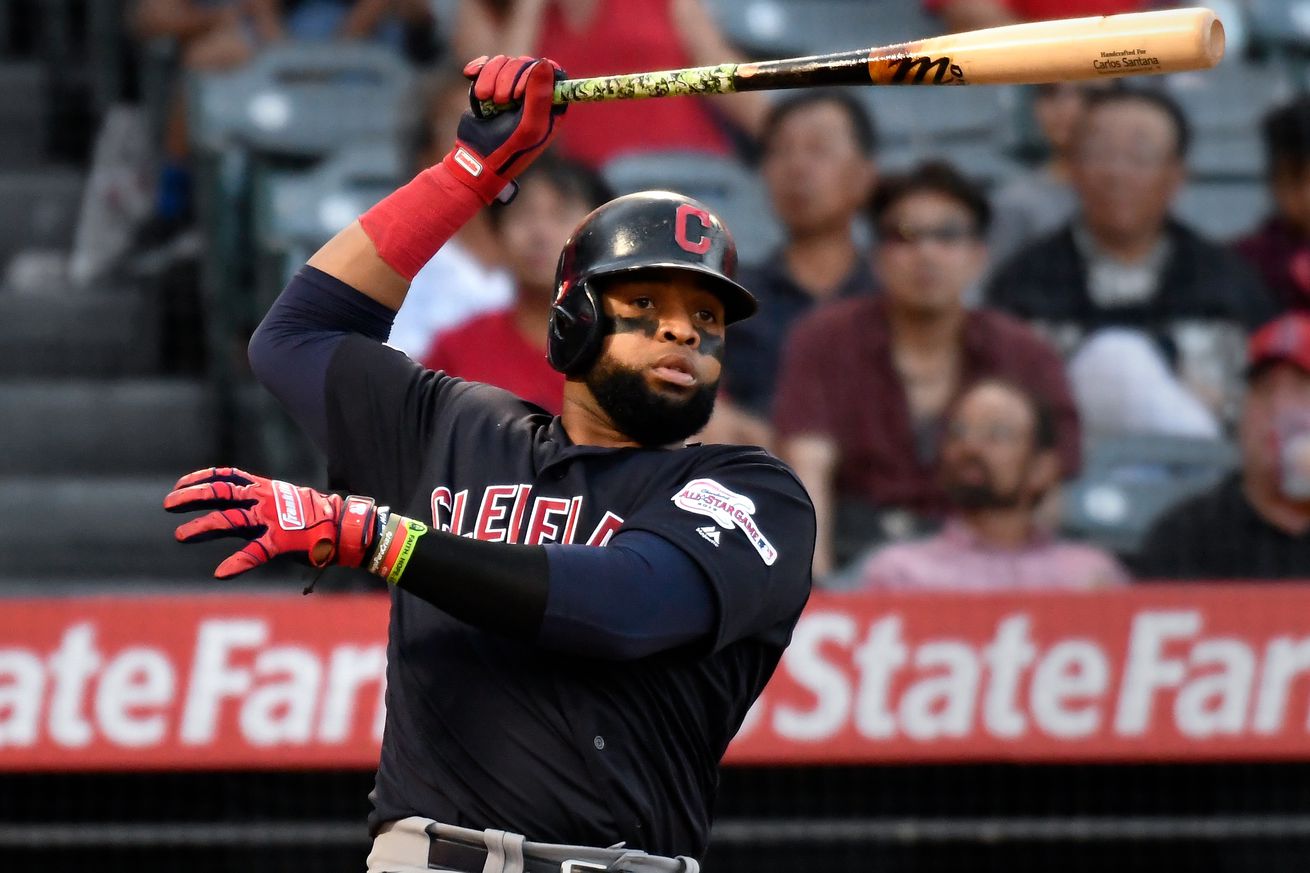 The Phillies’ playoff push continues against some old friends

Like the Phillies, the Indians are in a battle for a wild card playoff spot. Having two desperate teams facing off should make for a playoff-like atmosphere. It is yet to be determined if that will be a good thing for the fans watching at home.

While the Indians situation is less precarious than the Phillies’, with the season rapidly coming to a close, they similarly can’t afford to lose many more games. As a result, I expect both teams to treat these games like a playoff series.

That sounds great in theory, but then I remember that playoff baseball can be painful to watch. We’re probably going to get a pitching change every time a pitcher gets into the merest hint of trouble, and plenty of discussions on the mound.

A brief summary of the 2019 Indians

The 2018 Indians won the American League Central. The front office reacted by jettisoning several good players for various reasons (most involved trying to save money), yet are somehow poised to top their win total in 2019.

Before we give the Indians too much credit, it should be noted just how awful the bottom of the American League Central is. The Tigers are an 107-loss abomination, the Royals are poised to join them in the century loss club, and the White Sox have a good shot at 90+ losses as well. The Indians are 37-17 against those three, with a (brace yourself) 18-1 record against the Tigers. 18-1!

Imagine if the Phillies had a pitcher like Shane Bieber. In 2018, the young righty had a shaky season according to traditional stats, but his FIP implied that better days might be ahead for him. That, combined with his impressive stuff, made the Indians optimistic that he’d be a key part of their rotation in 2019.

That optimism proved well-founded. Bieber’s ERA has aligned closely with his FIP this season, and he’s already thrown two shutouts and made the All-Star team.

In unrelated news, Nick Pivetta has been buried in the Phillies’ bullpen. His last appearance came almost two weeks ago, when he gave up three runs in a lone inning against the Braves.

Four other SP with a >4.50 ERA and a top-160 ADP the last few years. As a whole, they’ve done really well the following season. #BloomBoards pic.twitter.com/aVFLfD25bg

Phillies vs. Indians: The rivalry

However, a few members of the Indians organization have ties to the Phillies. Let’s take a look back at those ties and three years in recent team history.

After years of non-contention and minimal spending in free agency, Phillies fans were desperate for the team to sign a big-name free agent before the 2018 season. In December 2017, the team finally acquiesced. Normally, a free agent signing builds excitement, but this particular signing resulted in more confusion than elation. Nobody could figure out how or why the team decided that Carlos Santana was their ideal target.

Most of the confusion stemmed from these factors:

@Phillies Are you drinking? What’s the point of Carlos Santana? Did you mistake him for the musician???

The plan was to shift Hoskins to left field, which ended up weakening the team’s defense at two positions. Hoskins was awful in left field, and Santana made several ill-timed errors at first base. He didn’t compensate with the bat, as his offensive numbers with the Phillies were more underwhelming than his career marks. (To his credit, he could still take a walk with the best of them!)

The most notable thing Santana did was to smash a television screen in the team clubhouse because he didn’t like to see his young teammates playing Fortnite during games, and he was frustrated because the manager wasn’t doing anything about it.

The front office realized its mistake, and traded him to the Mariners, who soon after sent him back to Cleveland, where he had played the majority of his career. Naturally, Santana is enjoying a career season in 2019. He earned his first All-Star berth, and at 34 home runs, he’s tied his season high mark.

Meanwhile, the Phillies moved Rhys Hoskins back to first base. He’s putting up average to below-average numbers for a first baseman, but he can certainly take a walk with the best of them.

Despite a horrific finish to the 1999 season that saw them go 10-21 to end the year, there was optimism about the 2000 Phillies. First-time manager Terry Francona had guided the team from the dark days of the 1997 season, and many thought the team was poised to make the playoffs for the first time since 1993.

Instead, the Phillies picked up right where they left off, going 7-17 in April. They were unable to climb out of that hole, and for the second straight season, they cratered in September. After the season, Francona was fired, and nobody besides Ed Wade disagreed much with the decision.

Francona eventually ended up with the Red Sox, and in 2004, he guided the team to its first World Series title in 86 years. The Francona-led Sox won another title three years later, and his eight-year stint with the franchise was perhaps the greatest in team history. In 2013, Francona joined the Indians, and he’s led them to four playoff berths, including an American League pennant in 2016.

Some baseball experts believe you should never hire a rookie manager, because its better to let him make all of his first mistakes for somebody else. Francona may be the perfect example of this. While nobody is going to claim that the late-90’s Phillies were loaded with talent, Francona didn’t seem to do much to improve the team either.

It just so happens that the current Phillies have a first-time manager who also shows his inexperience at times. I’m not saying that we should expect to see Gabe Kapler lead the Oakland A’s to the 2024 World Series, only that I’ll be extremely pissed if it happens. (Maybe by that point he’l have figured out the proper situation in which to execute a double switch.)

When the Phillies go to Cleveland tomorrow, I hope they bring Francona back with them.

Wouldn’t it be nice to have a manager with a proven track record — ending the Red Sox WS drought and turning Cleveland into a contender?

Tito back in Philly would be a nice “mulligan.”

2009: The answer to the Phillies’ job application question reveals itself

In 2009, the Phillies seemed to possess the offensive weapons necessary to defend their title, but their pitching staff didn’t seem to be up to the task. Staff ace Cole Hamels was having a down year, and due to injury and ineffectiveness, they weren’t getting much from any of the other starters either.

General manager Ruben Amaro tried to fix this problem by trading for Roy Halladay. But when the Blue Jays refused to back down in their demands, Amaro turned to the Indians and asked if they’d be willing to trade their ace for a smaller price. In the midst of a rebuild, the Indians agreed to send Cliff Lee to the Phillies in exchange for a package headlined by top pitching prospect Carlos Carrasco.

At first, the trade was seen as an absolute steal for the Phillies. Lee helped the Phillies make the World Series, while Carrasco spent the next four years either injured, ineffective, or both. In 2014, Carrasco turned a corner and finally developed into a quality pitcher. Three years later, he led the American League with 18 wins and finished fourth in Cy Young Award voting.

If you’re interested in applying for a job with the Phillies, I suggest you use Carrasco in your answer regarding trading a prospect. Carrasco was a top-50 prospect, and it still took him five more years after the trade to experience success. Meanwhile, thanks to Lee, the Phillies won another National League pennant, and along with the rest of the Four Aces, gave us one of the most fun (if ultimately disappointing) seasons in franchise history.

The only player the Phillies traded that looks like a franchise building block is Carlos Carrasco, but he is 28 and was traded 6 years ago

The Phillies have only played eight games at the Indians’ home stadium of Progressive Field. In those eight games, home runs have been hit by immortals such as Jeremy Giambi, Rod Barajas, and Delmon Young. (That’s like the worst list of players ever.) But one player was able to top those greats and hit two home runs in Cleveland. Who was he?

The Phillies aren’t going to allow us to give up hope until the very end. Santana will get a key hit to win one of the games, because that’s just how these things work. But the Phillies will find a way to win the other two, and keep their playoff chances alive heading into the final week of the season.