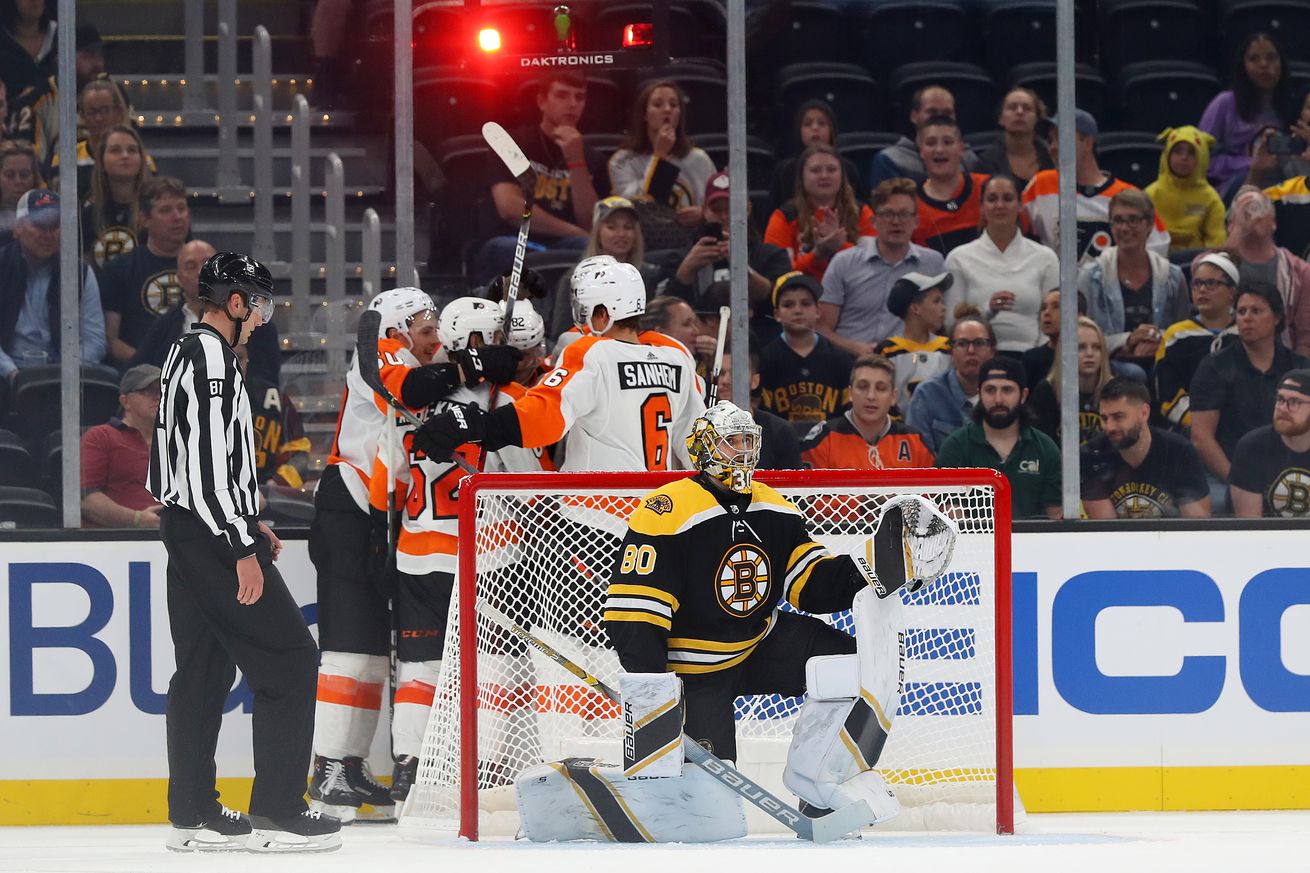 We got midseason shenanigans already, folks.

Despite the loss, there were a good number of things to like in this game. Forwards played well, defense was stifling for the most part, but in “Flyera” fashion it ends in a loss. Let’s start with the good!

Alright I gotta be honest with you guys, it absolutely did not feel like the Flyers were this good last night. The next group of stats will help explain that, but from a raw possession standpoint? They indeed killed it vs. the Boston Bruins. There weren’t a whole lot of flashy plays or even a tremendous amount of sustained offensive pressure for most of the first two periods, but the results were still there. A lot of this can be attributed to the defense, which was outstanding for the most part all game.

The first period proved to be the team’s worst with a still dominating 57.14 percent CF. What followed was a 61.29 in the second and a 64.52 in the third. They got better and better as the game went on offensively, and the defense remained incredible. They allowed just 32 shot attempts and kept Boston to the outside for most of the night. That might sound odd given all of the Bruins 5-on-5 goals were scored in high danger areas, but they all came at the hand of some horrific mistakes which we’ll get into later.

So while a lot of this looks good, and the Flyers clearly did the better job of finding the “home plate” or high percentage areas, there’s one stat that sticks out here: only two high danger chances-for. Comparatively, Boston had five — which to be fair, still isn’t a whole lot, which speaks again to the Flyers’ defensive effort. However, it’s more than what the Flyers had and that eventually came back to bite them. Each of Boston’s 5-on-5 goals were from high percentage areas and they made no mistake when given a good scoring chance.

This isn’t exactly surprising, given that Boston was one of the top 10 teams in expected goals-for percentage last season, and second to the Minnesota Wild in expected goals-allowed. The Bruins did what they do best, and the Flyers went toe-to-toe with them on the defensive front. They were just unable to get enough of those high percentage plays to cash in on. There were far too many point shots but again, Boston is so good defensively that taking what the other team gives you ends up being the smart move.

Unlike last season, they were able to get a decent amount of traffic in front of the Bruins’ net when they were taking these perimeter shots. There were a few instances where that didn’t hold true, but overall that a way to open up the shots down low by making them respect the point shot and worry about deflections.

1. Phil Myers had a night

And not in a good way. Myers was burnt two times last night and he looked ugly in the process. Overall, he had a solid game and those two mistakes shouldn’t drastically hurt his chances of being in the opening day lineup, but man those mistakes were not good. The first, a two-on-one that, in fairness, was primarily caused by a poor pinch from Travis Sanheim and left the rookie to deal with David Pastrnak and Brad Marchand; not ideal! While it was two of the Bruins best forwards, Myers looked like a fish out of water on this play.

It was a great effort to even get back and be in position to make a play, but he just played this so poorly. He starts as if he’s going to play Marchand, then tries to go to a knee and block the pass from Pastrnak, and he failed on both attempts. It’s hard to criticize him too much, but it has to be better than this come the regular season, from both him and Sanheim.

The second miscue lead to the Bruins’ third goal, as Myers attempted to knock the puck down with his glove, then play it. Needless to say, it didn’t work out too well for the kid.

Sean Kuraly stripped him and made him look silly, and scooped a pass over to a streaking Chris Wagner who buried the game-tying goal with less than two minutes to go. We all want these young kids to keep their creative mindsets, but this is an example of Myers just trying to do too much. Up one goal with less than two minutes left, he probably needs to take a more conservative approach on this play, even if it means allowing the Bruins a free zone entry.

2. The Bunn Man and The Germ post solid nights

Going into the third period, I didn’t imagine myself saying that German Rubtsov had a good game. There was a moment in the second where he skated by and I had to remind myself that yes, he had been playing the entire game. He was virtually irrelevant for much of the game but found himself as the game progressed. The line of him, Andy Andreoff, and Nicolas Aube-Kubel (who opposing broadcasters have such a difficult time with getting his name right) was one of the Flyers’ best last night.

Posting a 73.01 CF — score and venue adjusted — and an 84.91 xGF SVA. The line didn’t score, but they had a quiet yet productive night that should help both Rubtsov and Aube-Kubel make the team. You may ask, “well what about Andreoff?” First, don’t speak that into existence. Second, he definitely looked the least impressive out of the three. He missed what looked like a tap-in goal at the side of the crease, and then had a mind-boggling turnover where he flubbed a pass then decided it was a good idea to give it right to a Bruin streaking into the offensive zone.

As for Connor Bunnaman, he was part of most likely the Flyers’ best line last night which featured him, Kevin Hayes, and Oskar Lindblom. The line posted a team-high 78.67 CF SVA and an incredible 94.19 xGF SVA. Bunnaman even notched himself a goal when he gave the Flyers the lead in the third on this lucky bounce.

Pretty sure Bunnaman called bank shot on this one. pic.twitter.com/27buLZdGyU

Just a quick note about Aube-Kubel before we move on: that missed check he had on Jakub Lauko on the first goal? Yeah, that was big yikes. Overall a good game though for the kid.

3. Folks, what the hell was Brian Elliott doing?

This is going to be less of a “hey look at these stats” and more of an emotionally charged extreme questioning of what exactly Brian Elliott was doing last night. He doesn’t get blame on the second or third goals, but even with a great shot from Jakub Lauko, that puck can’t go in. It looked as though he just lost the post and when that happened it took a perfect shot — and to Lauko’s credit, it was perfect — to find the back of the net. But I want to talk more about his puck playing because my god, it is terrifying to watch.

He seems a lot more active when it comes to playing the puck which, in theory, is a good thing, but I’m not sure he’s actually good at playing the puck? He was doing more harm than good on multiple occasions and it was a stressful experience to say the least. It’s a good thing this is still preseason, otherwise my blood pressure would have been sky high watching that unfold. While the game-winning overtime goal for Boston was … questionable to say the least (why there was no whistle, why the hell is Elliott standing up??), it made no sense, just like everything else he was doing last night.

I’m not saying I want Sam Morin to make this team, but I’m not exactly saying I don’t want him to make it either. Look, regardless of your opinion of the hulking blueliner, he played well last night. He was paired again with Mark Friedman, who also had a solid game other than falling down on the first goal as Lauko steamed by him. Morin was the top Flyers defenseman in CF SVA with a 70.38, and posted a solid 66.23 xGF SVA.

The problem with Morin is obvious: he’s a bit of a nightmare when playing the puck. There were multiple times last night where he just couldn’t make a simple breakout pass and it almost burned him a few times. He is so confident and generally good at most other things but as soon as the puck is on his stick it turns into a game of hot potato. His decision making has been strong in regards to when to pinch and when not to pinch, his defensive zone coverage has been good, he’s had a solid preseason. We’ll see if that translates to a roster spot.

The “That’s so Flyers” moment of the game

It’s the overtime game winner because you know, of course we don’t get the “intent to blow” call when it would benefit us. Any other time there’s a quick whistle or they pull that card, but this time? Nah, we’ll let the Bruins have this one.