1:25pm: Sam Carchidi of the Philadelphia Inquirer reports that the two sides had been working on a six-year deal, but that things may have changed since Werenski’s signing. He adds that Provorov will not sign the same three-year, $15MM contract and noted in response to a reader that a six-year at $7MM per season “may get it done.”

9:35am: After Columbus Blue Jackets’ defenseman Zach Werenski agreed to a three-year bridge deal in order to get a new deal signed before training camp started, heads turned to Charlie McAvoy of the Boston Bruins and Ivan Provorov of the Philadelphia Flyers to see who would be next. Both young defensemen are in similar situations to Werenski, looking for big raises after solid starts to their careers. For Provorov at least, it seems to have moved things along. His agent Todd Diamond spoke to Rick Dhaliwal of Sportsnet today and reported that they and the Flyers were closer yesterday on a contract than they had been for weeks, and that things are starting to move in the right direction. 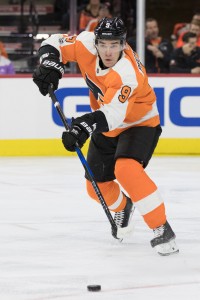 Provorov, 22, was taken just ahead of Werenski in the 2015 draft and has played all 246 games for the Flyers over the last three seasons. The former Brandon Wheat Kings superstar took almost no time at all to adjust to the speed of the NHL, recording 30 points and playing 22 minutes a night as a rookie. That ice time has only increased, to the point where Provorov was averaging more than 25 minutes a night in 2018-19, putting him sixth in the league in that category. Unfortunately his offense took a step backwards last season and the left-handed defenseman recorded just 26 points including just two on the powerplay. Granted, Shayne Gostisbehere is the lead dog when the Flyers have a man-advantage, but if Provorov is ever to become that Norris-caliber defenseman that some believed he could be, he’ll need to create more offense in one way or another.

Still, there’s no doubt that he is one of the most important players on the Flyers roster. Depending on term, he very well could become the highest-paid defenseman on the team, eclipsing Matt Niskanen’s $5.75MM cap hit. Whether he follows Werenski down the path of a bridge deal is unclear, but that would at least give the two sides more time to negotiate a long-term deal down the road.

If a bridge deal does come out for Provorov, it will be important to note his salary in the final season. That will determine the qualifying offer that follows the deal, which could—like Werenski—walk him right into unrestricted free agency. Provorov is currently scheduled to reach UFA status in the summer of 2023.