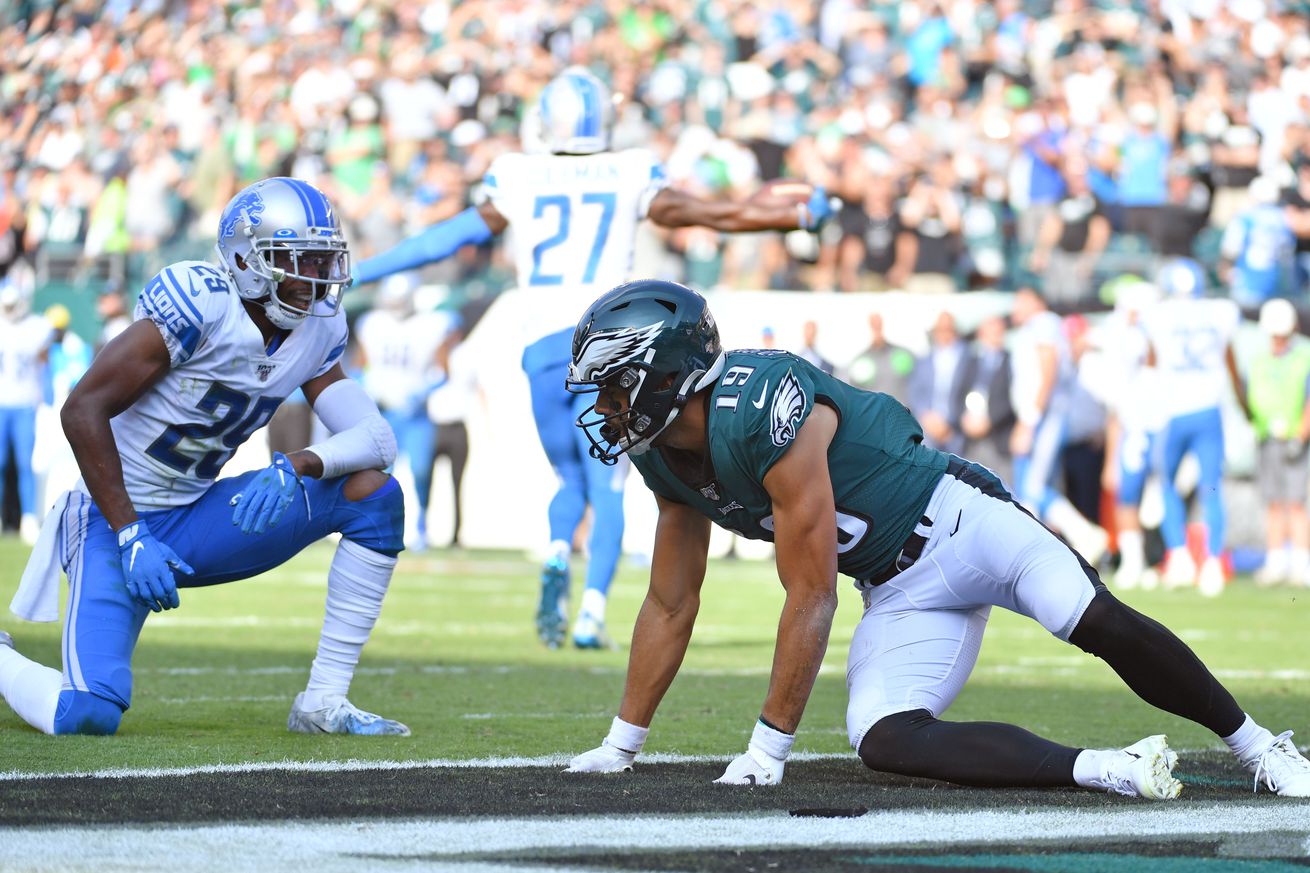 Carson Wentz might need to start throwing to himself.

Carson Wentz has had some real bad luck the past two weeks.

In Week 2, the Philadelphia Eagles inexplicably lost three key offensive starters who combined for 15 receptions, 221 yards, and four touchdowns in Week 1 — DeSean Jackson, Alshon Jeffery, and Dallas Goedert — to injury during pregame warmups. Wentz then predictably struggled in the first half of the Falcons game but he nearly willed his team back to victory. “Nearly” being the key word there since Nelson Agholor dropped a perfect throw from Wentz for a potential game-winning touchdown.

Somehow, drops were an even bigger issue for the Eagles during their Week 3 loss to the Detroit Lions. Jimmy Kempski, widely known as my co-host on BGN Radio, pulled clips of all those mistakes. Watch below if you really want to feel some pain:

2Q, 3rd and 7, own 43. A catch puts the ball just inside Lions territory. Chances are the Eagles get points if this catch is made and the drive is extended. Instead, punt. pic.twitter.com/Wk9Ki9oQSH

3Q, 2nd and 8, Lions 45. Jordan Howard, in for the seemingly temporarily benched Miles Sanders, has an easy one slip through his arms. The Eagles got a TD on this drive, so it ended up not being too costly. pic.twitter.com/d2Y72qRzkO

Side note: Love the assertion that Carson Wentz should have “led the WR more.” He’s moving to his left to avoid the rush. W/o the benefit of stepping into the throw, he launches it nearly 60 yards in the air, & puts the ball on his receiver’s hands. But lead him more, you bum. pic.twitter.com/FOdmLhcVK7

Wentz isn’t the first quarterback to deal with a bunch of drops. But he WAS in rare company this past weekend:

According to PFF, Carson Wentz had three of his deep balls dropped today. All other NFL quarterbacks today combined had three.

And drops were just part of the problem for the Eagles’ offense! There were also two fumbles and three offensive pass interference penalties.

The first OPI on Mack Hollins turned 1st-and-10 at the Lions’ 46-yard line into and 2nd-and-16 from the Eagles’ 33-yard line. The Eagles would have to punt from 4th-and-6 a couple players later. The second OPI on Hollins was declined since it took place on 3rd-and-7. The Eagles’ third OPI was on Darren Sproles and it wiped out 1st-and-10 from the Lions’ 20-yard line to instead bring up 4th-and-15 from the Eagles’ 45-yard line. It was this penalty that set up Wentz’s heave to JJ Arcega-Whiteside for a game-ending drop.

The Eagles must help out Wentz more and eliminate such critical errors if they’re, like, actually trying to win some games this year.

Q. When you have that many drops in a game, are there teaching points, or do you try to make sure guys forget about it? How do you go about that?