Eagles wide receiver DeSean Jackson has an abdominal strain that is expected to sideline him for about two weeks, sources tell ESPN’s Tim McManus. Making matters worse, Philadelphia is unlikely to have Alshon Jeffery in Week 3. Both suffered injuries against the Falcons. 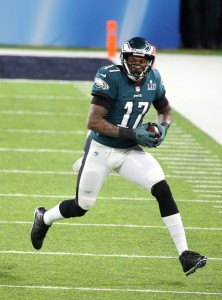 It is unclear when the injury actually occurred, but Jackson was not listed on the Eagles’ Week 2 injury report. However, he felt discomfort during warmups and only played 11 snaps on offense against the Falcons before exiting. Jeffery is dealing with a calf strain. Although not considered major, Jeffery’s status for the Eagles’ Week 3-4 games — which occur in a 10-day span — is in some doubt, according to NFL.com’s Ian Rapoport.

Jackson had originally hoped to play this Sunday against the Lions, but the Eagles will undoubtedly remain cautious with their speedster. The veteran logged eight receptions for 154 yards and two touchdowns in Philadelphia’s Week 1 victory against the Redskins. His presence as a deep threat is extremely valuable to the offense.

In the interim, the Eagles could look to promote either Greg Ward or Marcus Green from their practice squad, along with potentially signing ex-Eagle free agent Jordan Matthews. Matthews, who had three productive years for the organization between 2014 and 2016, was among the final cuts for the 49ers this past August. Matthews worked out for the Saints on Tuesday.