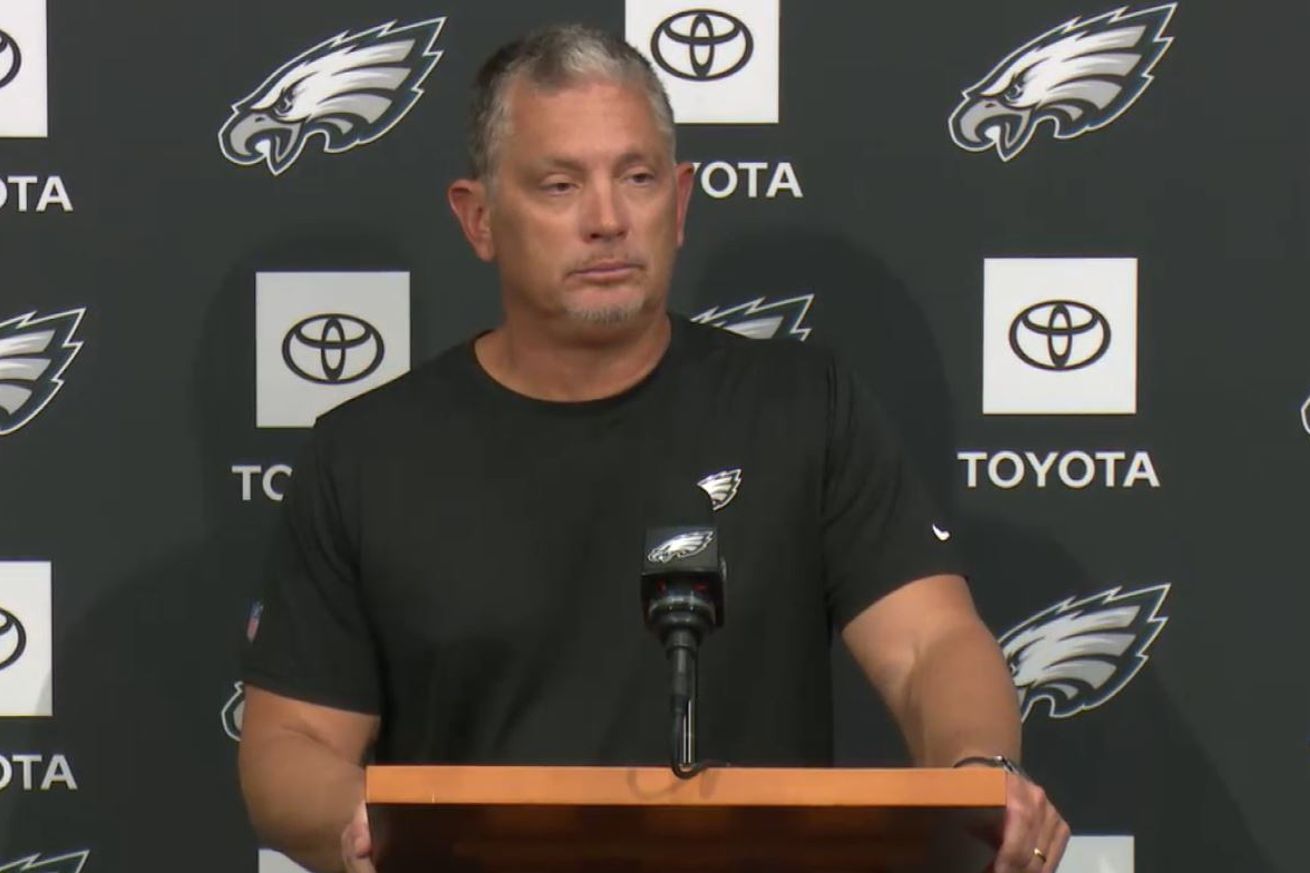 The Eagles’ DC also isn’t worried about Fletcher Cox or the lack of sacks.

The Eagles will have a walk-thru practice on Tuesday during a short week. Defensive coordinator Jim Schwartz spoke with the media and quipped, “short week, short press conference”.

Here’s what the DC had to say:

On having 10 men on the field vs. Lions

Schwartz joked that it didn’t look like there were only 10 men on the field during the second quarter against Detroit on Sunday. He went on to say that it was an unfortunate situation in the substitution pattern.

The DC pointed out that they were rolling guys in and out to keep them fresh, and then Derek Barnett went down with an ankle injury, and they were in the middle of getting that settled and all of a sudden they were back on the field with a turnover. At that point, there was miscommunication about who was going out there, and “we paid a heavy price for it”.

“Because even though they get the ball at midfield, we still got a chance to keep them out of field goal range.”

Schwartz went on to say that 3 points in a game like that is big. And there were a lot of things you could point to in that game and think “what if” and that reverse is one of them. If they would’ve been able to make that stop maybe they would have been able to keep them off the board — maybe not, but with an extra guy they would’ve had a better shot of making the stop.

On the defensive line

Similar to what was asked of Doug Pederson on Monday, Schwartz agreed that Fletcher Cox didn’t draw extra attention with the injuries suffered along the line, but that he always draws that kind of coverage.

Schwartz went on to talk about how every guy on the team has things they are trying to overcome and get better at. For Cox, it’s that he’s coming back from injury and missing OTAs and training camp, for someone else, it might be an injury they sustained in Week 1 or someone playing a little bit of a different position. So, everyone’s got challenges and there’s room for improvement across the defense.

Later on, the DC was asked why Daeshon Hall didn’t get any snaps with the injuries. Schwartz explained Hall was a 5th defensive end up and they were rolling three guys plus a fourth, plus Hall fills some different roles outside and backup special teams roles.

“It was just the way that it came out. I think if we would’ve had a bunch of two-minute snaps and — sort of like the opener when we had long drives and two minutes — we probably would have seen him out there a little bit more.”

He was also asked about the lack of sacks, and Schwartz said that you have to be careful judging teams based on one thing. He pointed out that the week before they had three interceptions, which on paper sounds like a great game, but it wasn’t enough to get the win. And you’re always sort of in that boat, if you win, it doesn’t matter that you didn’t get a sack, but if you lose you look at each and every play that could have been the difference-maker.

All that being said, Schwartz acknowledged the Eagles are a team that is very reliant on the pass rush, very reliant on the 4-man pass rush, and they’ve made some plays blitzing and also given up some plays blitzing. Overall though, they can do a little bit of a better job getting off the field, whether it’s because of the rush, or other aspects of the defense if the pass rush is being covered well.

Schwartz was asked what may be different when they face Green Bay on Thursday compared to the last meeting with their new head coach Matt LaFleur.

The defensive coordinator talked about how there’s still plenty of film to analyze and carryover from LeFleur’s time with the Rams and Titans, so it’s not like they haven’t seen his type of play. Plus, there’s still some carryover from the Packers before LaFleur took over, so you see a mix of all three systems coming together.

He was asked how they can put pressure on quarterback Aaron Rodgers who typically gets the ball out quickly, and Schwartz was quick to add “sometimes” to the notion, but also mentioned that sometimes he holds the ball for awhile and scrambles around. They’ll just have to continue to do their jobs and be prepared for all situations.

Schwartz went on to talk about how they’ll also have to continue to stay disciplined, because Rodgers also excels at the hard count. They’ve had limited offsides penalties thus far this season, and they’ll need to keep that going, because the Packers were able to score on one of those last week.

The DC said with the new coaching staff they might see a few new formations they haven’t seen in the past, but overall Aaron Rodgers is still a guy who can pretty much do it all — has an arm to cover the field, can make plays with his legs, etc…

With Ronald Darby out, a lot more pressure is going to be put on Rasul Douglas and Sidney Jones. Schwartz said those guys have built up a good number of snaps and have played well and consistent for the team.