Eagles defensive tackle Tim Jernigan will miss 4-6 weeks due to a broken foot, PFT’s Mike Florio (on Twitter) hears. Fortunately, Jernigan does not need surgery – an operation would have put his entire season in jeopardy. 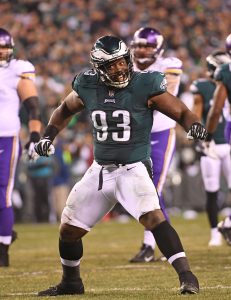 It’s yet another blow to the Eagles’ defensive line. Just last week, the Birds lost Malik Jackson for the entire year.

Without Jernigan, the Eagles will need even more out of new pickup Akeem Spence. It’s also possible that they could reach out to old friend Chris Long, though Long would only serve to offer help on the bookends and not on the interior.

The Eagles declined Jernigan’s option in March but brought him back at what turned out to be a substantial discount. After signing a four-year, $48MM extension late in 2017, Jernigan had to settle for a one-year, $1.25MM deal.

The veteran will look to bounce back quickly from injury and capitalize on his opportunity in free agency next March.