The 1-2 Eagles will try to fly without Ronald Darby for a little while. The cornerback suffered a hamstring injury on Sunday and is expected to miss at least a few games, Ian Rapoport of NFL.com (on Twitter) hears. Meanwhile, based on what Mike Garafolo of NFL.com (on Twitter) is hearing, he wouldn’t be surprised if Darby misses “about a month or so.” 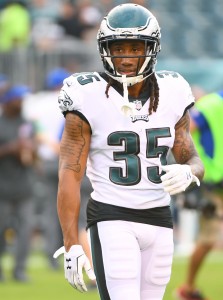 The Eagles will need all of the defensive firepower they can get, particularly if their offensive woes continue. If they’re willing to get aggressive – and Howie Roseman usually is – there’s a cornerback by the name of Jalen Ramsey who is on the trade block.

Darby, 25, registered four interceptions across 17 games for the Eagles in 2017 and 2018. Before the injury bug bit him yet again, he added another INT to the resume in Week 2 against the Falcons.