The Eagles have converted $13.925MM of Fletcher Cox‘s base salary into a signing bonus (Twitter link via Field Yates of ESPN.com). With a little help from the veteran defensive tackle, the Birds have created roughly $11.14MM in cap space for 2021. 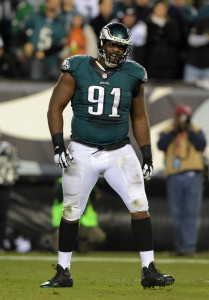 Cox is tied to Philly through the 2022 season as he plays out his six-year, $103MM deal. Cox has mostly held up his end of the bargain. At the time of signing, he was coming off of his first ever Pro Bowl appearance. Now, he’s up to six straight, including a 2018 All-Pro nod.

Cox remains a key cog on the Eagles’ defensive line, having notched 6.5 sacks from the interior last year. If Cox loses a step, the Eagles might not be inclined to carry his $23.8MM cap hit into 2022. But, for now, they’re able to comfortably keep him on the roster, thanks to the payout adjustment.