Eagles defensive tackle Malik Jackson is expected to miss the season with a Lisfranc injury suffered on Sunday against the Redskins (Twitter link via NFL.com’s Mike Garafolo and Ian Rapoport). Jackson is slated to undergo surgery next week and will be placed on injured reserve this week. 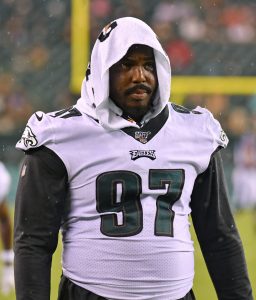 Fortunately, for the Eagles, they have depth on the defensive line outside of Jackson – Tim Jernigan is there to help fill in the interior gap while Vinny Curry and Josh Sweat are on hand to help on the bookends. In the coming days, it seems likely that the Eagles will also add another big man to help.

Jackson joined the Eagles on a five-year, $50MM deal in the offseason, though it’s really more like a two-year deal giving the Eagles flexibility on the remaining three. The pact includes $17MM guaranteed.

Last year, Jackson notched just 32 tackles and 3.5 sacks for the Jaguars, with Pro Football Focus ranking him 85th among 112 interior defenders. However, he was a Pro Bowler as recently as 2017 and enjoyed a solid first season in Jacksonville. Jackson also racked up 14.5 sacks across his final three years in Denver, despite only spending one of those campaigns as a full-time starter.