9:47am: The deal is official, the Sixers announced today (via Twitter). 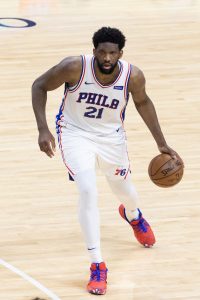 7:17am: The Sixers and star center Joel Embiid are finalizing a four-year, super-max contract extension that will keep him under contract through the 2026/27 season, reports Ramona Shelburne of ESPN. According to Shams Charania of The Athletic (Twitter link), the two sides have reached an agreement.

Embiid became eligible for a super-max extension when he earned a spot on the All-NBA Second Team in June. Unlike his previous contract, the 27-year-old’s new deal will be fully guaranteed without any protection related to potential injuries, according to Shelburne.

The 76ers put language related to possible recurring foot and back issues in their prior agreement with Embiid because he had been limited to just 31 total games in his first three NBA seasons at the time he signed it. Since then, he has avoided major injuries, appearing in at least 51 regular season games in each of the last four years.

Despite suffering a meniscus tear in his right knee during the first round of the postseason vs. Washington, Embiid only missed a single playoff game and had a big second-round series vs. Atlanta, averaging 30.4 PPG, 12.7 RPG, 3.9 APG, and 2.0 BPG. However, it wasn’t enough to get the Sixers to the Eastern Conference Finals, as the Hawks won the seven-game series.

Embiid, who didn’t require surgery on his right knee after the season ended, represented himself in extension negotiations, per Shelburne.

Simmons’ future in Philadelphia remains very much up in the air, however — while there has been no indication that the Sixers have engaged recently in any serious trade talks involving Simmons, there are also no assurances he’ll be on the team’s opening-night roster this fall.