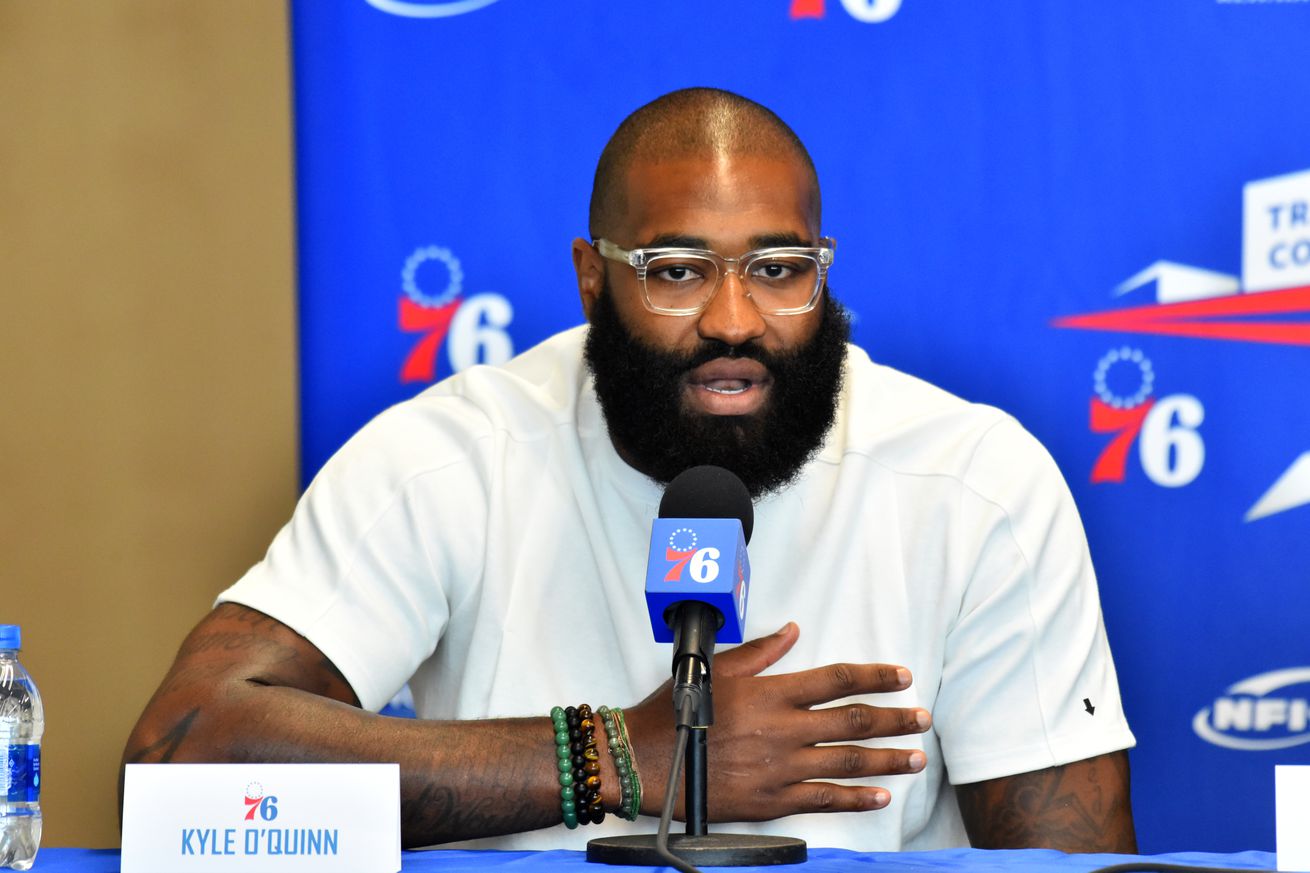 The Sixers hope Kyle O’Quinn’s arrival will help K.O. their backup center issues from a year ago. He is off the board 11th in our intrasquad draft.

Shout out to Liberty Ballers community member gramercy riffs, who has already made a fanpost about a Sixers intrasquad fantasy draft. We’re tweaking his idea a bit and putting the draft to a community vote in this exercise.

That was the Sixers’ plus-minus for the series against the Toronto Raptors for the 237 minutes when Joel Embiid was in the game. Seeing that figure, you would expect a team to win said series. However, in the 99 minutes when the big man wasn’t out there, Philadelphia was minus-111. The extreme split put a fine point on a problem that had been evident all year long for the Sixers: they fell apart whenever Embiid wasn’t on the court.

Enter Al Horford, getting $109 million to ensure the team has a full 48 minutes of top-level defense on the back line when needed. But also, enter Kyle O’Quinn, the Joe Blanton next to the Sixers’ two ace centers alignment, capable of being an innings eater of sorts during the regular season to keep both Embiid and Horford fresh for when things really count come spring.

Philadelphia hopes the 29-year-old O’Quinn hasn’t lost his fastball, coming off a season with the Indiana Pacers where he played under 10 minutes per game for the first time in his career. O’Quinn will have to dial back the fouling on those nights when the Sixers need him to play more of an expanded backup center role — his 6.6 personal fouls per 36 minutes last season were a career-high. Still, per NBA.com, opponents shot 8.1 percent worse than normal within 6 feet of the basket when O’Quinn was defending, comparable to the numbers for Embiid (9.4 percent worse) and Horford (5.3 percent worse). His rugged, “no easy buckets” mentality should help O’Quinn fit right in with the defensive identity the Sixers are trying to build this season.

Defensive identity is also the theme for our Sixers White squad, which Kyle O’Quinn just joined after receiving 48 percent of the most recent vote. With Ben Simmons, Josh Richardson, and Matisse Thybulle patrolling the perimeter, and O’Quinn back there to protect the rim and collide with the bigs on the other squads, Sixers White has opted to construct its roster around stifling defense. Shot creation and shooting will be more of an issue, just as it might be for the real-life Sixers this season.

Next up, Sixers Red is on the clock for two straight picks. With two bigs already on board in Embiid and Mike Scott, and Zhaire Smith still essentially an NBA greenhorn, the Red squad is in dire need of some ball handling. Raul Neto seems like the no-brainer selection here, unless you’re one of the Shake Milton truthers out there in the LB community. Most importantly, though, whoever links up with Mike Scott better be handy with a Nerf gun.

Who should join Joel Embiid, Mike Scott, and Zhaire Smith on Sixers Red?